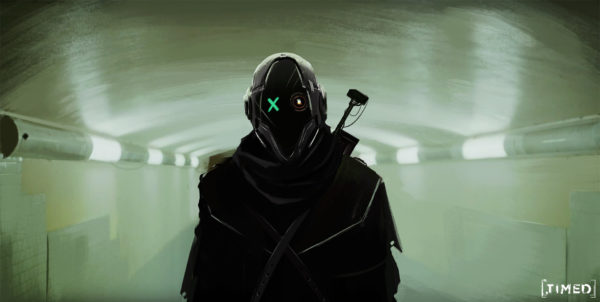 Timed is cross media project- a reality game and a comic series. It has been my role to art direct the game (concept, game design, UI…) and to take care of the advertising.

The game uses augmented reality and geolocation features. The plot is set in an hypothetical future where 2 nations that control the globe are in cold war with each other. Everything changes when humans with “powers” begin appearing around the globe; those humas are called TIMEDS. However, these powers come at a cost: the stronger they are, the shorter the lifespan of the host is.

The player is called to lead a group of TIMEDS and to battle players from the other faction.

After an extensive moodbard research, I begun by studying the logo and from there studying the mood. This was for me the first brick to build build everything else.

I went for something modern and flat, with some small dynamic details. The game is about leading your own agency of heroes, so i wanted something that could be eye catching for a gamer and professional for an agency

This is the very first sketch done for TIMED. I wanted to begin studying the visual mood of the project and this guy came out. I ironcally called him Johnny Katana as a joke, and later this became his name. He also appeared in both trailer and advertising.

After him, another series of sketches was done, with the purpose of promo art and concepting.

The trailer was a challenge. Short on time (very short) I had to coordinate the team in a very precise teamplay in order to respect the schedule, while taking care of the game content at the same time. How i manage to find location, actors and equipment, is a quite funny story.

Considering the given time and resources i had, i’m satisfied.

Music was composed and executed just for the trailer

An aplha version was done for Napoli comicon 2017, along with the very first press conference. We counted a significant number of players.

The gameplay structure was substantially different from the original concept, in order to grant a quick demonstration to everyone.

The feeback we got was heartwarming. Everybody loved Johnny so much that he will likeky be in the final game. With a more clear vision of the audience expectations, a few more sketches for some villains came out. Those are Dragon Paul and Jamie, Johnny’s main enemies that the player will likely face.

Time to push further and keep working. This is a very amibitous project and currently in development.